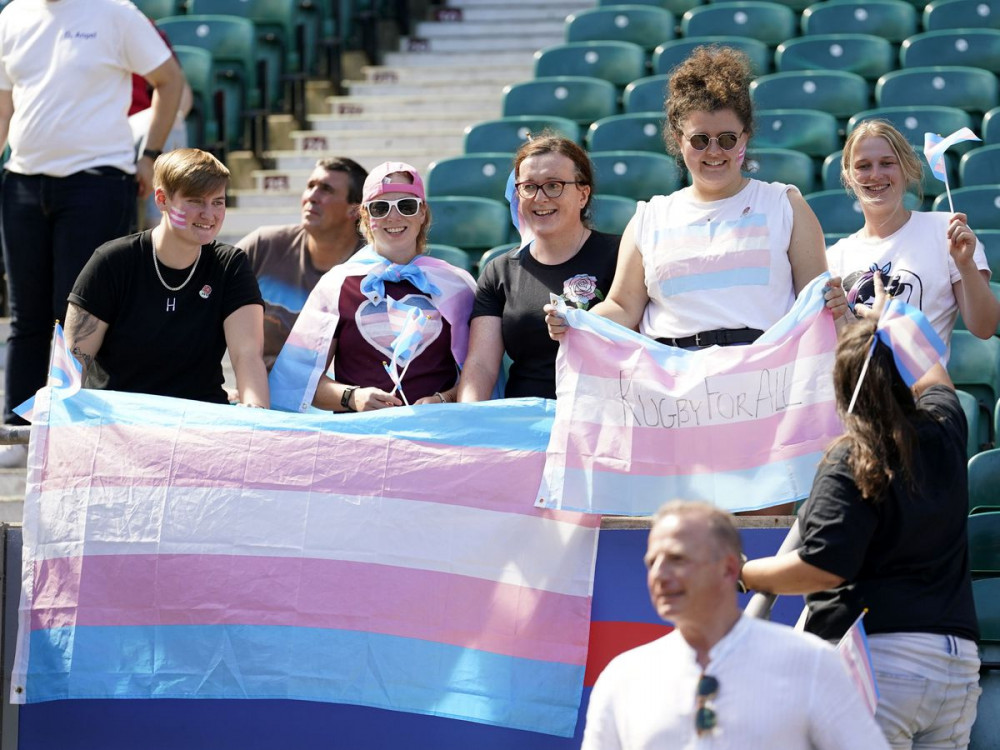 Activists protested at the England women's rugby squad open training session in Twickenham over an official ban on trans-athletes participating in the sport.

They were part of a 1,000 strong crowd who watched the Red Roses being put through their paces as they prepare for the World Cup in New Zealand, which is being held next month.

Emily Hamilton, founding co-chair of LGBTQ+ rugby supporters association 'Quins Pride', was among a flag-waving group of around 20 people staging a peaceful protest.

Hamilton, who played 18 seasons as an amateur before transitioning, insists that rugby is no longer a "safe and inclusive place" after the governing bodies voted to follow the lead taken by World Rugby when it implemented a ban in the elite game.

She told PA News: "We were part of the rugby family - I've been in rugby for nearly 40 years - but now we've been told that we're no longer part of that family.

"We are human beings but we are being used as a political football, being kicked about at all levels of life. We thought rugby is a safe and inclusive place, which it no longer is.

"We just want to be seen and to be visible and for people to understand that we're not the monsters we're portrayed as.

'"We're not freaks of nature and actually in many cases we're not that different to the women you see out there on the pitch training.

"It's also about the social contagion. What's happened in the last two weeks has opened the doors to the most horrific abuse - people telling me to kill myself, abusing me online - and just for standing up to say this is the wrong decision.

"The contagion spreads because people feel emboldened to be abusive and to repeat bigotry. That makes our lives less safe and less enjoyable.

"All of the fears I had when I transitioned are back again now because we're being told we're not welcome in the sport. We're swimming against the tide but that won't stop us swimming."

Hamilton said: ""It's absurd and disgraceful to ban trans women en masse having operated on a case by case basis. To say that every trans woman is automatically unsafe can only be said by someone who has never watched a match of rugby in their life.

"Look out on to the pitch now - there are body shapes of all sizes, so to blanket ban trans women on that basis is absurd.

"If we are now saying that rugby is dangerous for people of differing sizes to play against each other, that's not a trans issue, that's a much broader issue."

Among the players in action at Twickenham was Marlie Packer, the Saracens flanker, who is determined to tap into the feelgood factor generated by England's recent Euros success.

"What the football team did was amazing and the buzz around the country has been unbelievable, but like the Lionesses said it's just the start," she said.